The problem:
Some time ago I was overwhelmed with unread emails in my Gmail inbox. Mostly, they were newsletters, which I had no time to read. They piled up and I started to lose important emails in between them. At the time, there were more than 7000 unread emails. I tried to clean it up manually but it was very boring and time-consuming.

Guess #1
Grouping emails and deleting them in a bulk will extremely improve speed of inbox cleaning. Basically, I solved my problem with existing inbox cleaner in form of SaaS with a subscription plan (100$ per year for 5 mail accounts, cheapest service is about 60$ per year for 3 accounts).

Guess #3
After unroll.me scandal many peoples, who used it, now think about privacy issues.

So, desktop app can cover all free points.

I built the small prototype. It’s very basic and just group emails by a sender with corresponding statistic and ability to move to trash whole group:

[Album] Imgur: The magic of the Internet 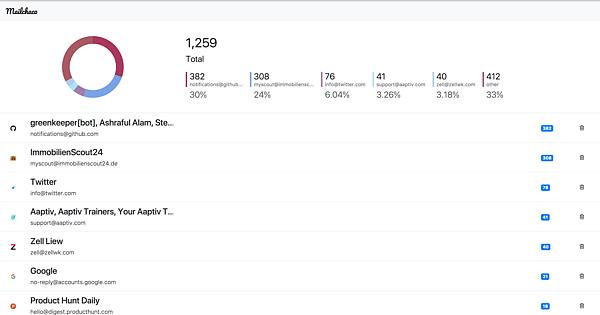 And if you have or had same problems, please contact me here or via PM =)

Thanks for your feedback!

So, desktop app can cover all free points.

It doesn’t cover the third point: privacy issues. Desktop, web or mobile - the application still needs to access my mailbox.

Desktop is marginally better than SaaS because a hacker/NSA (same thing) broken into the server won’t get access to all users at once.

What do you think about this idea?

I believe it is a weird problem to have. When I get emails from sources I do not want to hear from, I unsubscribe immediately. As a result, my inbox is usually 3-5 emails long.

How people get to 7000 unread emails other than by dying?

Anyway, that means that for me there is no value in that service. Of course, there are other people on Earth last time I heard, so there could be enough of them who:

P.S. Personally, I think that in a near future the inbox/calendar handling will be done by AI applications such as the one X.AI provides already. Pretty fascinating description in Business Systems Explored podcast, episode “Dennis R. Mortensen - The Future of Software And How Artificial Intelligence Will Change The Job Market”.

It does. With desktop you can just block everything besides mail servers for app and be sure that nothing cross your machine border.

How people get to 7000 unread emails other than by dying?

I am collecting the reasons =)

So a person who cannot even control their inbox can be meticulous enough to setup a set of firewall rules for an app?

I think these are two different people.

P.S. (Paranoid mode) The app can send the interesting tidbits via email to NSA and then delete the sent email.

I wouldn’t buy it:
-I have message rules set up in Mozilla Thunderbird to move newsletters to a separate folder, so they don’t clog up my inbox.
-I never let things get bad enough that I would need this software.
-It is easy to sort and filter in Thunderbird, so you can tidy things up manually quite quickly.
-I wouldn’t trust a piece of software to do this for me.

HOWEVER, how about if you talk to about 20 to 40 prospective customers to

Focus on THEIR problem not YOUR solution, to start with.

Exactly. There may be verticals out there that are run by email and need exactly this.

Or there may not.

An important point - don’t suggest your solution, understand their problem first, understand the cost (in all ways) they incur, and select a target vertical from that.

I think the problem inside the problem isn’t emails, it’s information. So I get a newsletter re “Replacing jQuery With Vue.js: No Build Step Needed”. I’m interested, but it’s not relevant to what I’m doing today. It would be great if I had a tool that would quickly let me harvest items like this out to some sort of framework where I could at some later point see all my links re Vue.js.

If I had that, deleting emails becomes easy.

It would be great if I had a tool that would quickly let me harvest items like this out to some sort of framework where I could at some later point see all my links re Vue.js

But its already a solved problem :

I agree. And that sounds like a small part of the Getting Things Done methodology. I think I need to have a place to put everything. And one of those is "hey, this looks like it might be useful some day.

BTW, what I am testing (based on the Tiago Forte guy I mentioned) is putting everything into InstapPaper (except PDFs which it can’t handle (PDFs go into Liner). They got into a “read later”. After I read and highlight them they go into Evernote. The link you mentioned might go right into Evernote.

The trick is to have a comprehensive yet lightweight system. I’ll keep you posted on how the Building a Second Brain (from Forte) goes